Started in 1979 as a mail-order company out of his home in Pasadena Maryland, Richard Hutchins quickly became one of the premier east coast BMX dealers. With an eye towards providing performance products that also looked good, Richard began developing his own product line by taking existing-brand products and having them show-chrome plated. The timing

An early Hutch frame sticker could not have been more perfect. Shimmering chrome was the latest trend, and the desire to look good out on the track was second only to winning the race. It didn't take long before Richard began developing his own product, outsourcing the manufacturing to other established companies such as Profile Racing, Thruster, MCS, and VDC. The first Hutch cranks, made by Profile Racing, were made in unison with Profile's first attempt at cranks. Referred to as 1st-gen's, these cranks were the starting point for Profile as well, who went on making cranks to this very day. The Hutch Hi-Performance cranks were chromoly tubing arms, triple plated show chrome, and billed as being lighter than a Takagi crank setup. Also introduced in 1981, his first complete bike was billed as 'The most beautiful bike in the world'. The Hutch Pro Racer was completely show-chrome with black parts and retailed for $419.75. The LiL Hole Shot for the 10 years and younger racers retailed for $439.75 both of which were likely some of the most expensive BMX bikes ever produced. The legendary status of Hutch was born. 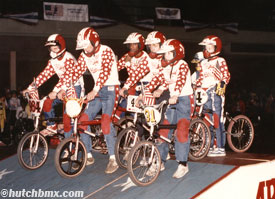 Hutch Team - February 1981
With an eye for talent, Richard acquired the rights to Titron and hired its young and talented leader to become Design Engineer at Hutch Hi-Performance Products. Bill Grove became the mastermind behind the signature design style of many Hutch products, including components such as the Bear Trap pedal, deep-H stem, 2n1 stem lock, Aerospeed cranks, and many more of the legendary Hutch product line. To fully understand and appreciate the revolutionary designs, one must put themselves back in 1981 and recall what was only available prior to this new Hutch style. There simply was nothing like the Bear Trap pedal, with its simple but aggressive round design. The Bear Trap pedal told other racers at the track that you were serious: serious to win, and serious to kick their ass in the process. The Bear Trap pedal is arguably one of the most significant product designs in all the history of BMX racing or freestyle. Hutch's use of exotic materials such as 7075 aircraft aluminum, 2024 aluminum, AZ31B magnesium, and 6al4v titanium put their products in a category unto themselves with virtually no comparables. 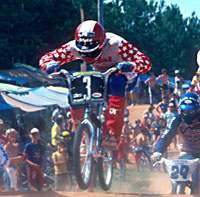 Toby Henderson The 'glory years' of BMX racing could be referred to as 1982-1986, and Hutch recruited some of the most talented racers of the day - including multiple World Champion and Grand Nationals winners. Riders like Rich Farside, Heidi Mirasola, Kevin ' Special K 'Collins, Andrew Soule, John McNiel, Toby Henderson, Monte Gray, Missy Fred, Jason Griggs, Steve Veltman, Charlie Williams, Rich Houseman, Brad Moore, Brit Adude, and Tim Judge. Tim Judge's signature one-footed table-top was an icon in itself, and affirmed the fact that rider style was very important. But changing dynamics were on the way. Freestylin' was the up and coming trend, which kids needed only to go outside in the driveway to participate rather than driving to the sanctioned race tracks. Hutch responded to this as well, with the introduction of the Trick Star, and signed legendary riders such as Mike Dominguez, Mike Buff, and Woody Itson. The culmination of ultimate style came with the combination of Woody Itson and his completely gold-plated Trick Star, perhaps the final and grandest gesture bestowed to the sport of BMX and freestyle ever, courtesy of Richard Hutchins.

In 1987, the sport of BMX and freestyle saw radical change. BMX tracks were shutting down, primarily to changing interests to freestyle or skateboarding. The ability to throw a $60 skateboard into a school locker rather than worrying about a $600 bike being stolen outside added to the trend changes. The dynamics of manufacturing were also changing. Extreme performance and engineering gave way to low-priced import bikes, and later, weight no longer was a selling feature as bikes continued to get heavier and heavier. A transition came with change of ownership, and Bill Bellis became the next leader of Hutch. But with a lost sense of identity in a changed market, the company ceased production in 1992. The reputation of a premium-quality product, which had given Hutch enormous success just a few years prior, ultimately became the burden that caused its demise.

Fast-forward to 2008 and the next transition. Like appreciation for art or antiques, BMX has come full-circle. People once again are beginning to recognize and appreciate the history and heritage of the companies that defined so much of the sport and how it became to be. To fully appreciate Olympic-level BMX Racing or X-Games freestyle today, one must understand how and why it got there, and to pay tribute to those companies that designed and developed the product that shaped the sport even if it was before their time. All companies contributed to this process, but none had a more profound impact than Hutch Hi-Performance BMX. The name will forever be synonymous with the ultimate quality, the ultimate designs, and the ultimate in engineering. A new chapter has begun, and that chapter is based on the same foundations that were established 30 years ago: the need to provide a premium-quality product to which there simply is no comparison.